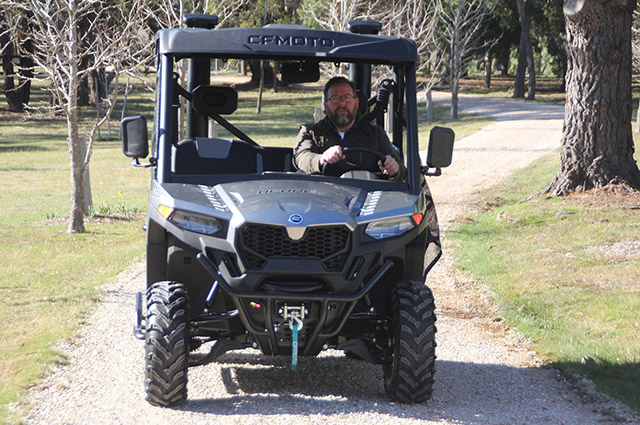 One of Australia’s most versatile and hard-working actors and entertainers, Shane Jacobson, has joined CFMOTO Australia as a brand ambassador.

The 51-year-old, who has accumulated a storied CV in film, television and theatre ranks over three decades, will become the face of CFMOTO Australia across the company’s various promotional mediums, including social media, websites and print advertising.

Moreover, you’ll also hear from Shane directly as he samples product across the full CFMOTO gamut: motorcycles, ATVs, UTVs and – for a man who loves the thrill of high-octane action – the powerful and impossibly entertaining sports side-by-side machines.


With his sharp wit, self-effacing personality and magnanimous, relatable qualities, Jacobson now belongs in the top-echelon of Australia artists as an actor, comedian, producer, writer and master of ceremonies.

He’s still widely known for his breakout performance as ‘Kenny’ in the eponymous 2006 movie for which he won an AFI award for best lead actor in a feature film.

Since then, Shane’s body of work across film, television and theatre has been voluminous, with some of the other highlights including his portrayal of Brant Webb in the telemovie ‘Beaconsfield’, playing the role of Barry Tregear in the ‘Irish Jack’ on the ABC, starring alongside legendary Aussie Paul Hogan in ‘Charlie & Boots’ and  working with Jeremy Renner in ‘The Born Legacy’ and Kate Winslet in ‘The Dressmaker’.

In theatre ‘Rocky Horror Show’, ‘Mother and Son’, ‘Shane Warne The Musical’ and ‘Guys N Dolls’ are among his credits, while his passion for anything with wheels was on full display as the host of ‘Top Gear Australia’.

Jacobson joins the CFMOTO stable as the marque continues on a rapid growth trajectory in Australia, particularly across the primary producer-focussed ATV and UTV segments. There’s also plenty of anticipation in the motorcycle ranks with the imminent release of several new models, including an ‘adventure’ family that will appeal to the Aussie wanderlust for travel.

Quotes attributable to Shane Jacobson:
”I am thrilled to be joining the CFMOTO family. The whole team has a passion and enthusiasm that is only matched by my eagerness to play with the entire product range it has – which is a lot!

“I can’t wait to share my stories and experienced of enjoying the bikes and vehicles in the CFMOTO stable with the world and, let’s be honest: it’s not a job, it’s a joy and privilege, but hey someone has to do it.”

Quotes attributable to Michael Poynton, Director of CFMOTO Australia:
“We are delighted to welcome Shane Jacobson into the CFMOTO family. Shane’s now a giant in the Australian entertainment landscape thanks to a combination of talent, persistence, preparation, a tireless work ethic and generous spirit. And he’s bloody funny!

“We see parallels with Shane at CFMOTO. Since we entered the Australian market, we’ve had an unwavering focus to be the best we can in some hotly contested battle grounds. The farm sector is one of those.

“In many ways that hard work has paid off and we’re already a strong force, but having Shane as an ambassador for CFMOTO is a massive shot in the arm in terms of expanding our brand recognition and supporting our ever-expanding two and four-wheel portfolios.”