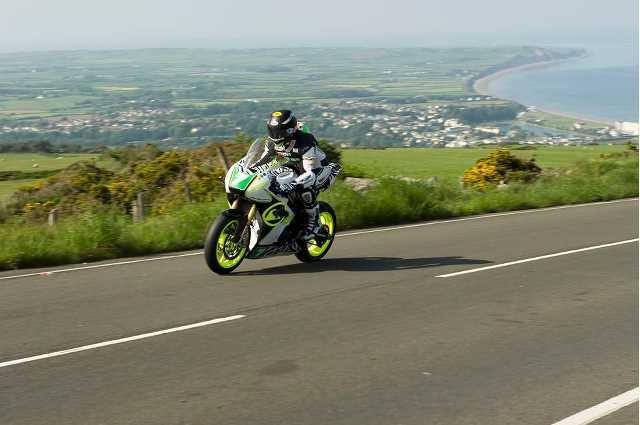 Despite a challenging start the 2014 IOM TT, CFMoto still made headlines as the first Chinese manufactured bike to finish the TT race and the first new manufacturer to enter the competition since 1957.

"Pitting a Chinese manufactured machine against Japanese and European giants has certainly caused a stir and it shows the strength of conviction we have in its reliability, and performance capabilities." said team spokesperson Henry Maplethorpe.

During a week of practice and qualifying sessions, 2014 CFMoto/ WK Bikes Pilot, Gary Johnson, pushed the 650i to new limits clocking average speeds of 114mph and qualifying 7th with a 19.51 lap time.

In one practice session, Johnson finished fourth – an outstanding achievement and testament to the quality of the bike and the skills of the pilot.

Tragedy struck just days before the race when 33 year old Johnson crashed during the 1000cc supersport race and had to bow out of the championship due to injuries.

"We posted some great times and a fourth place in Gary`s practice was better than we could have imagined." Maplethorpe said.

Fellow TT legend, Paul Owen with more than 50TT finishes under his belt stepped in to replace Johnson but with no time on the bike prior to the race to prepare for the gruelling three lap race, experienced pilot Owen couldn’t get the team across the finish line.

Another surprise was British rider, Callum Laidlaw who raced his maiden TT on a CFMoto 650NK using a standard engine and suspension. The 24 year old’s best lap was the final where he clocked a 21.20 and finished a very respectable 33rd place with top speed of 106mph. Of his finish, Laidlaw said "I am so happy to have got a finish for CFMoto and WK bikes on their 650NK machine. I think the machine is fantastic and I want to compete many more times on this bike."

With 2014 marking the first year a Chinese manufactured bike finished the illustrious Isle of Man TT Race, CFMoto has undoubtedly left a deep impression on many people both on and off the track.

Speaking of the teams experience this year, Henry Maplethorpe said "Although this year‘s final race result didn't go our way [we had] some huge positives to take from and work with in 2015. We look forward to next year’s TT Race."