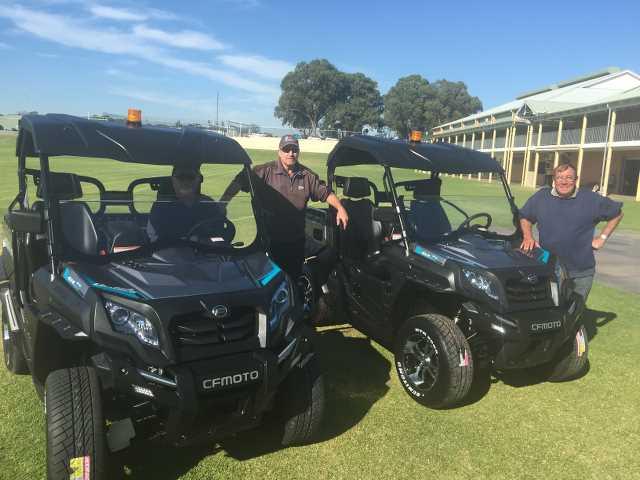 The guys at Quads R Us delivering the U550's

CUSTOMISED U550'S ON HAND FOR SCHOOL IN WA

Western Australia CFMoto Dealers ‪Quads R Us were on hand last month to present Frederick Irwin Anglican School with their new U550's which were fitted with road tyres and safety lights so they can be used around the school grounds for maintenance.

Director for CFMoto Australia, Michael Poynton said CFMoto dealers usually jump at the chance to help out not only schools but the community in general.

"Our dealers not only know how to service and maintain our vehicles but because they know our products so well they are also able to do this type of retro-fitting for customers too which then adds another level to the service they offer in their businesses." Poynton said.

Mike Hambridge who owns Quads R US in Western Australia said it was great to work with the school on this one.

"We special ordered the vehicles as they hadn't been released on the west coast at that time, so not only did the school get two unique UTV's, they also got the first U550's in Western Australia." Hambridge said.

The trend in side by side vehicles continue to gain ground with Poynton suggesting sales in this sector could be as high as 30% before the end of the year.

A distinct difference between ATV’s and UTV’s is the safety advantage with seatbelts and factory approved roll cages (ROPs) now fitted as standard on all side by side vehicles.

"Probably a key reason why the school chose to have these vehicles in the first place." Poynton said.

To find out more about Quads R Us, you can visit www.quadsrus.com.au