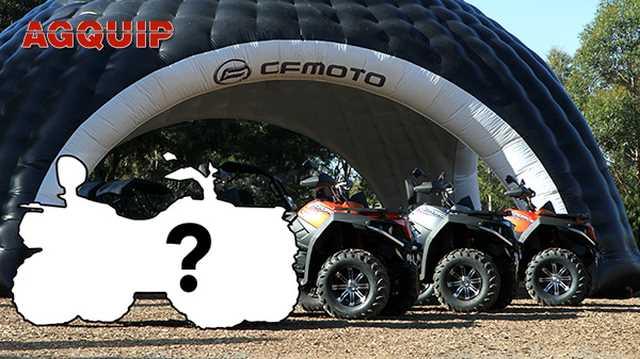 CFMoto will be launching a new ATV at Agquip

It’s on once a year and 2015 is set to be bigger and better than ever for CFMoto who are keeping tight lipped about a jaw dropping new vehicle which will be unveiled at Agquip 2015.

CFMoto NSW Area Manager, Bob Walters said the company has doubled the size of their site in 2015 and has a set up that will be “pretty hard to miss”.

“We’ll be pretty unforgettable this year at Agquip, besides bringing our entire range and launching a new ATV which will get everyone talking, we’re also bringing our inflatable CFMoto marquee which is two storeys high!

“Agquip is such a unique opportunity for us to really engage with our customers, ask them what they think about our vehicles and feed that information back into our business so we can improve not only our service but the quality and features of our vehicles.” Walters said.

CFMoto will also be offering Agquip only specials like a side by side UTV for under $10,000 and a launch special on the new ATV which will save visitors thousands and see them go home with change in their pockets.

“We’ll also be bringing some of our new Service Packs for customers who already own a CFMoto and are after some great products and accessories for the vehicle.” Walter said.

You can see the full range of CFMoto’s on display at Agquip, site B11 and B12 from 18-20 August in Gunnedah New South Wales.