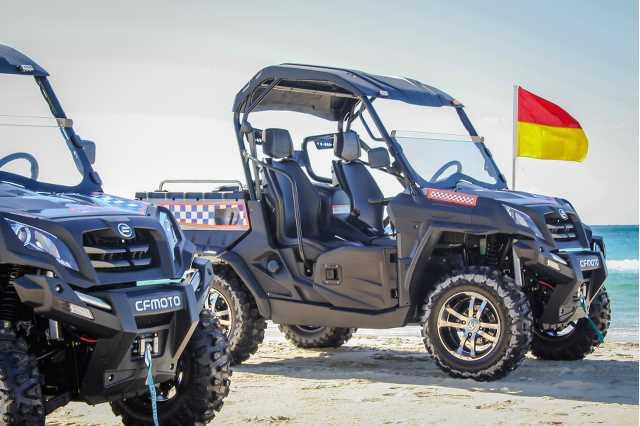 Gold Coast based, CFMoto dealer, Action Motorcycles worked with local police to turn the two silver U8’s into patrol vehicles which Queensland Police will use to patrol the beaches and other off road areas in Surfers Paradise.

CFMoto Queensland Manager Gary Ridden explained the U8LE’s are well suited to the task because of their protective roll cage, seat belts and extra storage space in the rear tray.

‘’Working as a team with Action Motorcycles has just landed what we believe will be a very long and productive relationship between Queensland Police and ourselves.

“These units are replacing the old Yamaha Rhinos which have been decommissioned. The U8LE’s were the perfect replacement because of a number of key options the vehicle’s required which no other brand could supply factory fitted.” says Ridden.

Having reached a major milestone last year with the sale of their 10,000th vehicle, Ridden believes the secret to CFMoto’s sales success is the extra’s the vehicles offer as standard inclusions like the roof, windscreen, winch, tow pack, alloy wheels and electronic power steering.

Our U8LE is a great example of value for money with all the bells and whistles from as little as $15,490 ride away.

For full details of CFMoto’s side by side model range, visit www.cfmoto.com.au/offroad or to stay up to date with CFMoto, visit the Facebook page or sign up for the monthly CFMoto newsletter, Hello from CFMoto.