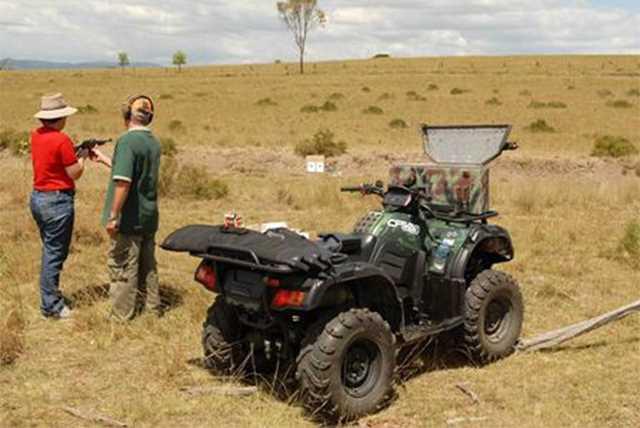 Whilst riding my CF500 around farmer properties I get to talk to a lot of like minded people. I am there culling animals with legal firearms and time and again I heard comments such as “I must get my firearms licence back again”.

After a whirlwind course for Certificate lV in Training and Assessment I gained my firearms instructor licence and now travel the length and breadth of Queensland running firearm safety courses for those in need; such courses a pre-requisite when applying for a firearms licence.

Well, my feet are barely touching the ground! People in their droves are lining up to get their firearms licence for the first time or sitting the course to get one back that lapsed due to the debacle of over burdening legislation.

No, I’m not complaining; far from it! Apart from getting to ride the CF500 around a lot more different properties, there is a certain level of satisfaction one gets from ensuring that mums, dads and their offspring are safe around firearms and that the community is better for it.

A bit of history on gun legislation in Australia:

While it got rid of a lot of ‘now illegal’ firearms, namely semi automatic types it did remove a lot of firearms from the community that were unregistered. Some of this legislation was draconian and silly to say the least and ill-thought up by those suffering knee jerk reaction to that terrible event.

I felt a little closer to that event than many. I was at Port Arthur three weeks prior to Martyn Bryant going on his rampage and was visiting the historical sight with wife and then, two young girls. There were not too many mobile telephones in existence in those days and on coming back to my vehicle discovered I had a flat battery.

The lovely senior ladies in the kiosk did me a favour and rang the afterhours number of the one and only local (but closed on a Sunday) Ampol service station. The proprietor donned his overalls and delivered and fitted a new battery for me at no extra cost over and above the cost of the battery. Sadly, three weeks later, those very ladies in the kiosk were deceased at the end of a smoking gun and so to was the helpful service station proprietor who was found dead in the boot of his own vehicle abandoned on Bryant’s family property.

In the ensuing years tough legislation blanketed the shooting fraternity but as time wore on those growing up in that environment became used to the bureaucratic red tape and slowly moved into the sport of shooting whilst those dispossessed returned. And haven’t they! There are now far more firearms in the community being used safely and legally than pre 1996, and most of the criminal acts involving firearms are being committed by those who don’t really give two hoots about any legislation at all! After all, most are career criminals.

If you are reading this and live in rural Queensland and are looking to do a safety course for Category A, B, C, D & H firearms, give me a ring on 0419 011 113. I can do the safety courses on your rural property and you might get to have a ride on my CF500.