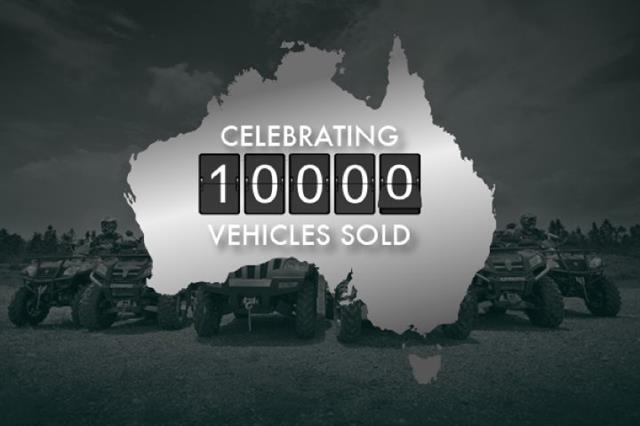 10,000 REASONS TO CELEBRATE FOR CFMOTO AUSTRALIA

The achievement comes off the back of three solid years of growth which, according to ERG data has seen sales grow 473% and made CFMoto Australia the fastest growing motorcycle brand in the country every year since 2010.

Director, Michael Poynton believes the brand’s success stems from having an excellent range of tough ATVs, side by sides and motorcycles that offer exceptional value for money for Aussie buyers.

“In a recent customer survey we conducted, more than 95% of our customers decided on their vehicle based on value for money.

“They save thousands of dollars on accessories because our vehicles come standard with things like a winch, towpack, roof, windscreen, six ply tyres, and in some cases alloy wheels.” Poynton says.

“When we started to sell ATVs in 2010, we had 15 CFMoto dealers and sold a respectable 435 vehicles.

“Today we have more than 80 dealers nation-wide and in 2013 recorded almost 2,500 vehicles sales which was exceptional given our humble beginnings.

The company is well poised to continue their current growth trajectory and strengthen its position in the Australian market with the imminent arrival or new ATV’s and side by side vehicles which will see sales in the second half of the year soar.

The UTV market alone, which CFMoto will aggressively pursue in the future, grew by an astonishing 65% in 2013, showing an industry shift toward side by side vehicles in Australia and across the globe.

“Over the past year, we’ve really strengthened our position in the up and coming side by side market, introducing the U8 and the Z8 to the CFMoto range.

“We are also coming to market with some new models this year in direct response to changing consumer preferences.” Poynton said.

To facilitate the expected growth, the company have commenced construction of a new 5000m2, state of the art warehouse facility in Altona, Victoria.

“The 10,000 milestone shows just how much CFMoto Australia has established itself in the hearts of minds of Australian customers and is proof that the brand will stand the test of time.” Said Poynton.